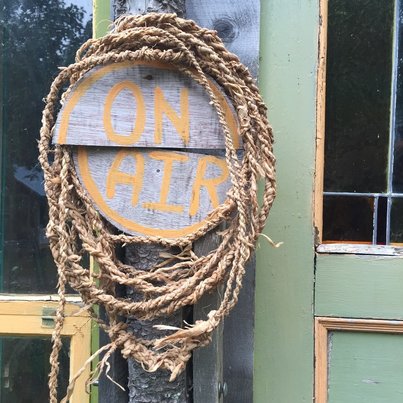 Image Credit: Terri Fidelak
A collaborative project with artist  Terri Fidelak  under the creative moniker - Ghost & Thing. This partnership was formed in response to shared interests in landscape, community, collaborative practices, and relationship to nature and place.

By the Hand // Tug-O-War was created during White Rabbit, an immersive, week long, collaborative residency at Red Clay Farm on the Bay of Fundy, Nova Scotia, Canada. Every summer Red Clay Farm invites a small group of artists to live and work within it's unique ecological and social landscape while pushing the boundaries of their practices, collaboratively and individually. White Rabbit encourages a sustainable and environmentally stable approach to art making and being in the world.

This experience engaged us in collaborative processes of skill sharing, intimate explorations of site and the gaining of knowledge of local ecology and eco-systems. In response to these investigations, a hand twined rope was made out of the strong yet malleable bark of the black locust tree - introduced to Nova Scotia from the southern United States, and with a history of use in basket making. The labour intensive process of peeling, soaking and twisting the fibres of the inner bark of this tree into a lengthy rope was shared amongst  the larger community at Red Clay farm. Set up in the accessible space of an apple orchard, others working at this busy, collaborative farm and art space could stop, rest, and lend a hand in the twining of the rope, while sharing in conversation and the shade of surrounding apple trees. This simultaneously practical and aesthetic object, made entirely of natural materials sourced on site, became a participatory object in multiple ways.

Upon it's completion, the rope and it's makers were brought to the muddy shores of the Bay of Fundi at low tide. (This bay boasts the largest tides of anywhere in the world, resulting in huge, temporary expanses of tidal plane -  rich red in colour.) A game of tug-of-war was staged and documented over the course of three and a half minutes. The documenting film captures a short scene of a game, and the intersecting tensions of competition and collaboration amongst a close-knit, intentional community.

After the completion of the White Rabbit artist residency, Red Clay Farm hosts it's yearly, White Rabbit Festival - inviting members of the larger surrounding community to visit and interact with the property and art works created on site.  Our rope became an avenue for collaboration with an east coast artist, Amanda Stevens. A naturalist and plant enthusiast, Amanda led night time plant identification walks wherein she invited participants to identify foliage through unconventional means, including touch, taste and smell. Amanda used the rope to guide participants off the familiar path to engage with the forest in the dark.

By the Hand is a phrase that references intuitive ways of understanding. As many hands formed the rope, we became more intimately aware of surrounding plants, animals, people and place. The meditative and repetitive process of rope-making carved a space for transcendence and connection between it's makers and the landscape within which we found ourselves.