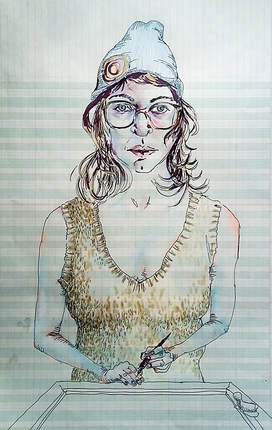 Self Portrait With Small Hands - 2010

​Amber Phelps Bondaroff if an interdisciplinary visual artist, performer and arts organizer, living in Regina, Saskatchewan, Canada. She crafts situations that encourage people to make and be together.  Through these spaces, her work strives to soften the rigidities of conventional social interaction. Amber works across many mediums, including; soft sculpture, costume, drawing,  printmaking, music and film. There is a strong focus on re-use and re-imagining of materials throughout her work.

Born in Calgary Alberta, Amber lived and traveled to many places around the continent and around the globe, before moving to Saskatchewan in 2012. She has been molded by her involvement in various collaborative creative communities including the Elsewhere Artist Collaborative, based out of a thrift store in North Carolina, and the Art Shanty Projects, a public art festival and experimental community on the surface of a frozen Lake in Minnesota. She is the founder of the NoDS project (Network of Domestic Spaces) a reticulum of artist residency spaces situated in people’s homes and co-artistic director of Swamp Fest - a music and arts festival in Regina. She received an MFA in Intermedia Arts from the University of Regina, in 2014 and a BFA in interdisciplinary fine arts from NSCAD University, Halifax in 2007.