Visitors to LyfeStyle Landing entered into a waiting room where they were prompted to fill out a brief questionnaire. Once finished, they were invited, in small groups, into the backroom "sales office." Pearl and Gil analyzed their answers, running the data through a specially calibrated "LyfeStyle optimizing machine" (a reconfigured adding machine.)  Participants were then awarded a new life, based on their results. Lyfestyle categories included a new: Occupation, Vehicle, Pet, and Social Engagement.

Lifestyle options awarded to participants ranged from the mundane, to the absurd; largely inspired by and pulled from vintage magazines, constructed lifestyles possessed a fantastical quality, and were rooted in an indeterminate era. The dress of the sales associates, as well as the decor of the sales centre, felt based in the past (80's power blazers, and a vintage adding machine) while the presence of futuristic pseudo-technology, bestowed the piece with an edge of science fiction and fantasy.

The process of determining lifestyle parameters was largely random, cards being drawn from a series of coloured boxes. The process encouraged participants to interact with Pearl and Gil, under the assumed premise of having just purchased a new condo, and corresponding new lifestyle. Opportunities for spontaneous improvised engagement and play were frequent.

This piece was created in collaboration with artist Jeff Meldrum, and was developed as part of the Wreck City Artist Residency in Calgary, Alberta Canada, performed during public presentation of the project.
Photos: Mike Tan 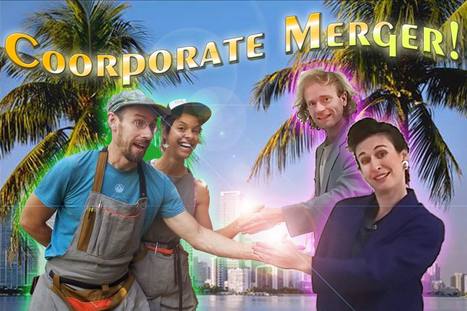 Coorporate Design: Wayne Garrett
After initial performances of LyfeStyle Landing, the piece was left as an interactive installation for another two weeks time. Audiences continued to interact with the sales centre, filling out questionnaires, and choosing lifestyle options for themselves. A later collaboration with The General Store (Nikki Marten's and Lane Shordee) saw a re-engagement with the piece in the form of a Corporate Merger. The General Store re-animated LyfeStyle Landing, using all of the tricks, tools and language of corporate culture to create a collaborative business platform between these two collectives.